The National Museum of Naval Aviation is one of the largest and most beautiful air and space museums in the world. Share in the excitement of Naval Aviation's rich history. See over 140 beautifully restored aircraft representing Navy, Marine Corps, and Coast Guard Aviation. These historic and one-of-a-kind aircraft are displayed both inside the Museum's 291,000 square feet of exhibit space and outside on the Museum's 37-acre grounds. Soar with the Blue Angels in the dazzling seven-story glass and steel atrium that showcases four A-4 Skyhawks in a diving diamond formation. View them at eye-level from the mezzanine. Retrace the first flight across the Atlantic; stand on the flight deck of the USS Cabot.

Enjoy guided tours; fly an F/A-18 mission in Desert Storm through our motion-based flight simulator. See The Magic of Flight, our own IMAX film projected on a seven-story high screen, and feel like you've had a bonafide ride with the Blue Angels. Enjoy a delicious lunch at the CubiBar Cafe, decorated with over 1000 squadron and unit plaques reassembled from the historic Officers' Club at Cubi Point in the Philippines. This Museum, preserving the history of Naval Aviation, is the most visited museum in the State of Florida. There is no charge for admission. Open to the public from 9 a.m. to 5 p.m. seven days a week, 362 days each year, except for Thanksgiving Day, Christmas Day, and New Year's Day. 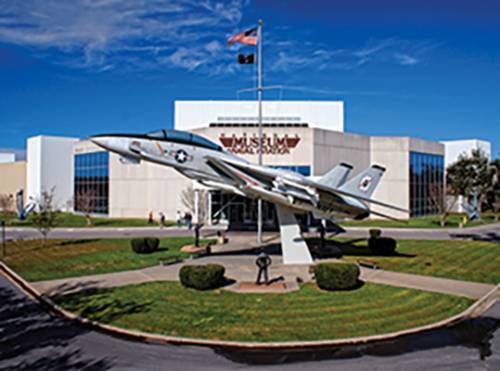